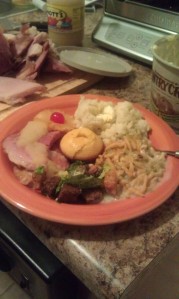 Christmas this year, though not surrounded by the hustle and bustle of my crazy family, was still centered around the food. As it should be. Even though it was only me and my hunny, I still went all out to try and bring in the feeling of being home. I made ham, and green bean casserole, garlic mashed potatoes, a salad, cornbread, and macaroni salad (even if we did forget to eat that). Oh yeah, and used my new Cuisinart Toaster Oven (Thanks Mom in Law!) for an apple pie.

For these big holiday meals, I’ve found that I should have paid more attention to my Mom when she was cooking, because I have called her a lot knowing what I want to make and not having any idea how to do it. Here’s the lowdown on ham:

Buy a ham. (obviously – don’t want to insult your intelligence here, but just stick with me…) Don’t buy the smoked ones, or the spiral cut ones. Buy the one that your instinct tells you is going to be way too much of a pain to cook. It will have one side that is flat and the other will have a big bone in it. It tends to be sitting in a center aisle freezer in your grocery store.

If you don’t already have them on hand, you’ll need whole cloves, dark brown sugar, a jar of maraschino cherries, and a 14 oz can of sliced pineapple (the rings). Oh, and some toothpicks. 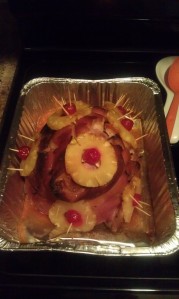 So, to put it all together. Take the ham, put it in a big pan (I’m running the risk of rhyming here…) flat side down, and make slices into the ham, creating little squares, just through the fat. In the corners of these squares, put the pointy side of the cloves. After you’ve done that, take the pineapple rings, and using the toothpicks, pin them around the ham. They don’t have to cover it, but they work to flavor the ham and help keep it moist. And then, take the maraschino cherries and pin them into the center of the rings. Finally, take the brown sugar and rub it into the exposed parts of the ham. It creates a yummy glaze.

Once this is all done, cover the pan with foil, and stick it in the oven at 350 for one hour. At the hour mark, take the foil off, and leave it in the oven for another 30 minutes. The fatty part of the ham should be crispy and pulling away from the ham, your cloves will be falling out. Those crunchy skin pieces? They’re the best part.

So, how ’bout a leftovers recipe? Of course you can make some yummy ham sandwiches…but what about Mac and Cheese with ham and broccoli? Doesn’t that sound so much better? I used the recipe from Macaroni and Cheesecake, in which she cooks the noodles in the milk and then adds the spices and cheese. I changed it up a little bit though, I added ham and broccoli which I sauteed in some olive oil with onions, and I also did a half and half mixture of milk and heavy cream. I’m thinking she was right about the milk though – the cream is too thick, and I had to add a lot more milk at the end. From previous experimentations, I have found that gruyere and cheddar cheese taste really good together, so I did that too. You all should try it! It makes pretty tasty leftovers too… 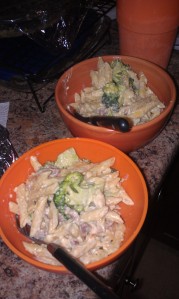