Two days off from work left me with a little time to do a lot of things. I bought Marlene Koch’s new cookbook, Eat More of What You Love, and I’ve been wanting to try some of the recipes out of it. I had bought some blueberries from Sam’s Club that were begging to be made in to coffee cake (from her first book) and I had some bananas on the counter that really wanted to be made into banana bread. Well wouldn’t you know it, she had a recipe for that in her new book.

Let me just start by saying, sorry I don’t have a picture of the banana bread. When I took the picture, I couldn’t figure out why it was so dark. I later figured out that I hadn’t changed the exposure back since the concert this past weekend.

But this banana bread used molasses, Splenda, bran flakes and wheat flour instead of the normal sugar, brown sugar and extra stuff that’s no good for you. Given, one piece is still 120 calories, but that’s an after lunch treat I can afford. If you’re a lover of banana bread like I am and have some bananas sitting around that you should have eaten days ago, try out this recipe. 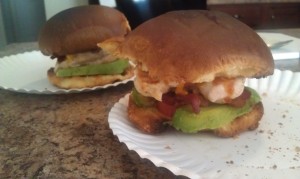 My dinner adventure also came out of her new book, though I altered it just a smidge. Its a chicken sandwich with barbecue sauce and bacon (and healthy?? What??), and instead of the lettuce, I used avocado. I also mixed some hot sauce in with my barbecue sauce.

Chicken breast, pounded, and seasoned with salt and pepper then cooked (grill or pan, your choice). Cheddar cheese, barbecue sauce, a wheat bun, lettuce, tomato, and a piece of bacon. Done.

So an update about the diet. Weekends as of late, not so great for me. I get too excited about a Saturday and my honey being home and cheat too much on my diet. Or I have a really bad day at work and have a Jack and Coke or two. But during the week, I’ve been really good. Like eating salad every night, and only going over my calorie count by maybe 100, very seldom. Working out, I don’t run as much as I should, but when I do work out, I push it. And guess what? My little accomplishment this morning… I fit back into a smaller pair of my jeans. Not as well as I used to, but before the wedding I couldn’t even get them buttoned. Yay!