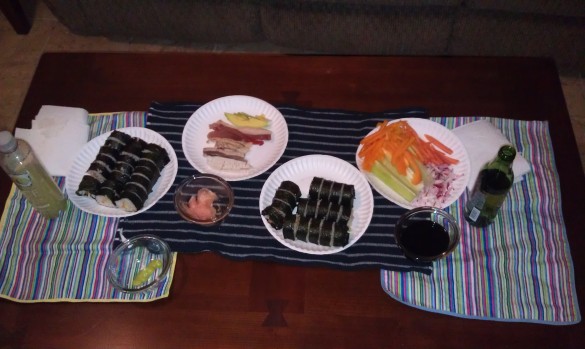 Sunday night has become watch party night for Walking Dead for my foodie friend and I. It’s a much anticipated night throughout the week as we’ve challenged each other to explore foods from different cultures. This past Sunday was Sushi night! Little did my friend know that I have a cheating contraption that makes it oh-so-easy. Used previously, it worked splendidly yet again. And our sushi was delicious. Both last night and today for lunch.

This contraption is about the oddest thing you’ll ever see. It looks like a caulking gun with a plunger on the end. Basically, you open it up, put the rice and your goodies in, then close it and push out the sushi on to your nori paper. Then roll it up and cut it up

. And it eliminates trying to make the perfect little roll by doing the hard work for you. It took a little bit of exploration to find the nori in this little southern town – I actually had to go to Nashville to get it, at Whole Foods no less. Then I got some wasabi paste and pickled ginger at Publix, along with the tuna and swordfish we used. The tuna was expected, the swordfish came from a suggestion from the fish monger there – he said it was commonly picked up by other customers because it was a milder fish with a flavor similar to Mahi Mahi (which I actually like). It was surprisingly delicious.

We did up the fish three ways – raw, with a tiny dribble of sesame oil for a smoky flavor, and with some lemon-garlic powder and sea salt. I think the third one took the cake in flavor. Although they all tasted great. Our other ingredients included carrots, cucumber, avocado, bell pepper and radish. All chopped in to little bitty slivers. It took some knife skills, let me tell you. And rice? Use the rice cooker – not the stainless pot. It burns when you don’t stir it up and you have an electric stove. Thankfully we salvaged a majority of it. And then make sure you mix in that dribble of rice vinegar for the perfect sushi flavor.

I also made a yummy asian slaw to go with this – though we didn’t get that far – I might have forgotten it in the fridge because the sushi anticipation was killing me and we had been munching on the sashimi already… I sent him home with some so that it didn’t go bad in my fridge and I had some with my lunch. I think letting it sit made it even better. It had some of the same ingredients: cucumber and carrot, with the addition of cabbage, bean sprouts and tangy green apple. I then dressed it with lemon juice (to keep the apple from turning brown), and a vinaigrette made with a tiny bit of mayo, agave, sesame oil, rice vinegar and spicy garlic mustard. Yum.

Zombies and sushi… how is that not the perfect combination??? Fish has the same texture as “BRaaIInnnsSSss!!!” And yes I know I’m an odd bird sometimes.

My blog posts have been lacking lately, but it’s not because I haven’t been eating fantastic food! A lot of it has been with my new foodie friend (continuing with the non-naming trend on this blog), who helps keep me sane, and introduces me to new flavors in the kitchen. We’ve done the from-scratch chicken and andouille Gumbo – his mama’s Louisiana recipe, chicken and tangy kale, fantastic wine with awesome labels, chicken cordon bleu, sushi that is almost too fancy to eat and a big fajita spread. There is also the three pepper salsa that he made for the superbowl, and the fig and brie en croute. My tummy has been supremely happy as of late. Since I keep forgetting to write about this fabulousness – here is a photo montage for you to drool over. 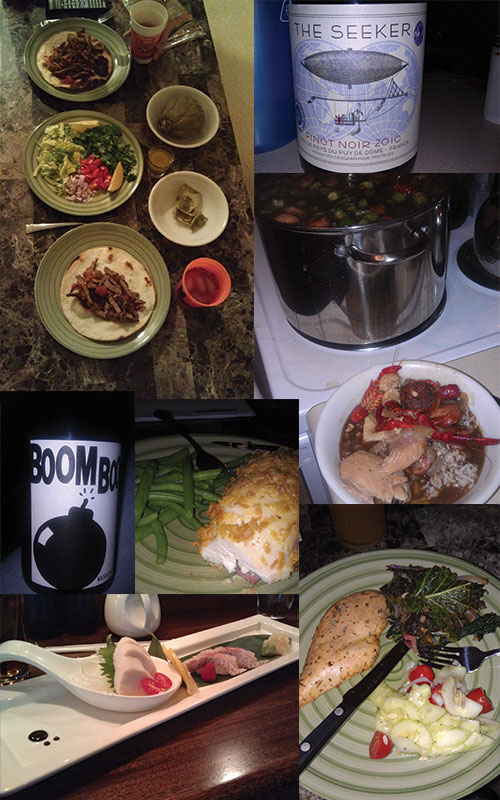